IRPRESUNIV.ORG, CIKARANG – Under the Journalism Division of President University Major Association of International Relations, Journalism Training has been successfully conducted. The event was conducted on 5th June 2021 and raised the theme “Find the truth, Unfold the reality” which demands the participants be involved actively to act as a journalist to find and unfold the reality. This event also was attended by the Head of International Relations Study Program, Mr. Dr. Muhammad A.S Hikam M.A, Ph.d. Also was attended by two amazing speakers, Ms. Baby Kristami who is a news reporter at iNEWS, and Mr. Emir Chairullah, Ph.d who is a Journalist at PT. Citra Media Nusa Purnama and lecturer at International Relations Study Program President University. 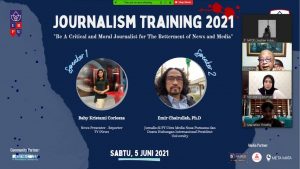 The event was opened by the Master of Ceremony, and then continued by reading all the agendas for a whole day. After the opening by MC, then continued to the speech by Head of International Study Program, Mr. Dr. Muhammad A.S Hikam M.A, Ph.d. Next to the second speech came from Chairperson of PUMA IR, Marcelino Timothy. Then, the last speech came from the Project Manager of Journalism Training 2021, Igesta Putri. After all the speeches session, the agenda continued to the material session that was delivered first by Mr. Emir Chairullah which explained how to write good journalistic writing, and the second material was delivered by Ms. Baby Kristami about how to do research and interview for reportage matters. After the material session, there was a playback for video roleplay for the need of case study, and the participants were also given time to have a group discussion about the case study, then continued to the interview session with the roleplayer. When the interview ended, the participants looked so interesting and actively discussed with their groupmate, and the interview session was the last agenda for the first session.

The second session continued after the break time. As usual, the session was opened by the master of ceremony and then continued to the writing article session that will be done by the participants with their group. When the session has already passed, the participants are given the next material session which was delivered by Ms. Baby Kristami regarding how to deliver the news in a news anchor way. Next to the most awaited one agenda, which was the news anchor simulation from the representative of the group respectively. The participants performed a very good performance and the excitement was also inseparable from the support of each group. After accomplishing the simulation session and the games session, I eventually arrived at the last agenda, which was the awarding session. The event was closed by the master of ceremony and not to forget also to encourage all the participants to do the photo session together.