IRPRESUNIV.ORG, CIKARANG – A new day, a new event. The Foreign Affairs division of President University’s Major Association of International Relations (PUMA IR) held the event, dubbed Military Visit 2019, where students of the International Relations study program headed towards the Halim Perdanakusuma Airforce Base in East Jakarta on Tuesday, the 16th of July 2019. The visit was attended by students of the study program, ranging from Batch 2017 and Batch 2018.

It started off with the participants gathering in President University’s Student Housing (PUSH) at 6:15AM, accompanied by both Mr. Hendra Manurung, and Professor A.A. Banyu Perwita, both lecturers of President University’s International Relations study program. Once it was 7AM, it was time to head to the location of the visit. Patiently waiting through the traffic, alas, the arrival to the Airforce Base had come. We were greeted warmly by our guide, Captain Agus Supriadi, who had led us through the Museum LANUD Halim Perdanakusuma. He had explained effectively all about the items available in the museum, allowing the participants to have a new insight of what goes on in the airforce. 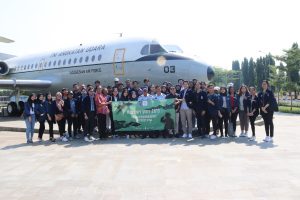 After the brief tour through the museum, a representative from the Halim Perdanakusuma Airforce Base had given the participants materials on what was the purpose of the airforce, before showing a video of the proudly acclaimed Indonesian aerobic airforce team, Jupiter. The tokens of appreciation were then exchanged, before taking pictures by a replica aircraft. The participants of the Military Visit had continued touring around the base, despite the heat, enjoyed the tour immensely, and gained a lot of new informations.