IRPRESUNIV.ORG, CIKARANG—The International Relations study program of President University had celebrated its 10th anniversary after being established through the event held by the President University Major Association of International Relations (PUMA IR) called IR Birthday. The event had many agendas, including: Diplomat One Day, National Seminar: Presidential Lecture, and the IR Birthday Celebration Night. It was held on the 16th and 17th of October; Diplomat One Day was held on the 16th of October, and the National Seminar and IR Birthday Celebration Night was held on the 17th of October.

Diplomat One Day is an event mainly held under the Academic Division of PUMA IR, with the purpose of letting the students of the International Relations study program get a glance into the life of a diplomat. This event was held in Holiday Inn on the 16th of October 2019. The agendas in this event consisted of a seminar, table manners and lastly, a short diplomatic course. The seminar was guided by a beloved lecturer of the International Relations study program, Prof. Anak Agung Banyu Perwita, Ph.D., discussing mainly about the main topic of the event which was ‘Arctic Countries Territorial Dispute’, but Prof. Banyu’s presentation was focused on ‘Global Power Politics in Arctic: Prospects for Cooperation and Conflict’.

After the seminar, the participants were taught of the basics when it came to table manners. An expert from the hotel the event was held in gave their presentation, explaining the ways to correctly hold utensils, how to act when being a host or being a guest, and how the table settings are supposed to be. While the presentation was going on, the participants were served their meals which consisted of bread, appetizer, main course, and dessert. It was a fruitful activity as dining etiquette is the basis of being a diplomat with many important dinners.

The event’s last agenda was the Short Diplomatic Course, with cooperation from the members of President University’s Model United Nations club (PUMUN), the participants had actively participated in this agenda, showing great enthusiasm for the topic. This activity would help greatly to those who plan on being a diplomat in the future, or those who have a passion for diplomacy and negotiation. Once the Short Diplomatic Course was adjourned, the event had ended with a quick photo session and IR Birthday would continue the next day. 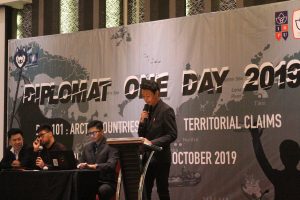 The event had begun with opening remarks from the Head of the International Relations study program, Mr. Hikam, expressing his gratitude for being a part of the International Relations family. It proceeded with a speech from the Chairperson of PUMA IR, Muhammad Hibban, thanking everyone who had came to celebrate this milestone. Lastly, the Project Manager of the event IR Birthday, Joseptian Feliks had gave his remarks, thanking everyone who had helped with making the event happen and his gratitude for it being a success. Once the remarks were done, Mr. Hikam, Miss Natasya, Prof. Banyu, Muhammad Hibban, Joseptian Feliks and a representative from the Batch 2019 had officially opened the event by cutting a ‘tumpeng’, a traditional Indonesian dish used for ceremonies. 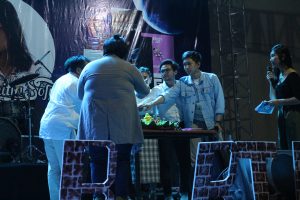 The night was filled with joy, many tenants of amazing food and drinks, music and videos of International Relations achievements, awarding sessions for the Diplomat One Day, and a performance by the International Relations cheerleading team, Wolves, before a special performance by the guest star, Adhitia Sofyan. The event had come to a close with the help from another guest star, Kenzy Jay, a DJ that successfully closed the event with a bang.